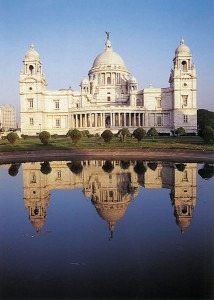 This volume presents the Victoria Memorial Hall, Calcutta, its architecture and the collections, as originally conceived by Lord Curzon, Viceroy of India 1899 – 1905. He both initiated the project and took a direct hand in its architectural design and the assembly of its holdings. The museum was founded in 1906 and opened by the Prince of Wales in 1921. Besides being an outstanding monument of British India it is arguably the most important example of British colonial architecture in the world. Its holdings include the finest group of paintings by European artists working in India between c 1780 and 1830 comparable to and more numerous than those in the Tate Britain in London and the Mellon Collection at Yale.

A unique conservation project began in Calcutta in 1990 when the Victoria Memorial Hall embarked upon a joint venture with the Calcutta Tercentenary Trust (UK). In the course of this work there were many exciting discoveries: artists’ signatures were revealed during the process of cleaning, new attributions were made, and paintings known only from literary sources were found. The volume is illustrated with numerous colour plates of the museum collection, many rarely seen and hitherto unpublished.

By focusing on a single building and its collections – both magnificent and in a world class – intrinsically interesting art and architecture are integrated into a broader context.