Mythical Animals in Mughal Art: The Dragon and the Simurgh

“ All the princes seek Huma’s shadow – behold this Huma (me, Humayun) who enters under your shadow”

Humayun, the second Mughal emperor whose capital was at Delhi 1530-1540 and 1555-6 CE, thus alluded to his dilemma when seeking refuge at the Safavid Court of Shah Tahmasp in 1540. The image of the Huma, mysterious bird who lived only on dry bones yet whose shadow was so full of blessing power that over whomsoever it fell would become king – Humayun regained the throne at Delhi in 1555 – was a familiar metaphor to the Safavid and Mughal nobility who inherited the Persian literary tradition. Such metaphors composed the very fabric of classical Persian poetry inherited by the Mughal court, and a wealth of images of flora as well as fauna contributed to the poetic prism through which the many levels of experience were illumined.

Many of the literary descriptions of such ‘mythical’ animals were given visual form also. These are found principally in paintings illustrating Persian literary texts such as the works of Hafiz, Sa’di, Jami, Nizami, Qazvini, ‘Attar, Amir Khusrau, Firdausi, to name a few; but under the patronage of the early Mughal emperors they also appeared in individual works prepared for muraqqa’ albums and in other media such as carpets, architecture, and occasionally textiles.

However the mine of classical Persian images was not the only source available to the Mughals, for they were heirs to several cultural traditions in which mythical animals featured – the Islamic traditions of the Turkic, and Arabic worlds and of the Sultanate Courts of India; and of Hinduism. The Mughals consciously drew upon all these fountain-heads in their attempt to forge a ‘Mughal’ identity from the disparate groups which composed their pluralist court. Thus mythical animals of the Hindu pantheon – such as Ganesha, Hanuman, Jhambavan, Garuda, Kesi, the Gaja-simha – are found in the illustrated Persian translations of Hindu religious texts which were commissioned to promote religious understanding. They also appear in original compositions and in various media, alongside images drawn from the classical Persian repertoire, to create new metaphors and symbols appropriate to the new dynasty.The aim of this contribution is to reflect upon two particular ‘mythical’ animals and their significance in Mughal art from the middle of Akbar’s reign c. 1580 to the reign of Aurangzeb c. 1680: the dragon and the simurgh.

If many creatures which appear in Islamic sources are not known to have a physical existence in the material world, they nonetheless had a real presence in poetic and literary traditions where their identity and attributes were elaborated. Different genres of literature tended to focus on particular species in the animal kingdom. Thus birds predominated in poetic images, symbolising the soul in Islamic as well as in many other and more ancient cultural traditions : the nightingale, the dove, the falcon, the hoopoe amongst many. Pre-eminent as a symbol in mystical poetry was the Simurgh, taken as the manifestation of spiritual reality.

The gradual replacement of classical Persian imagery and the elaboration of new metaphors and imperial iconography during the last quarter of the sixteenth century reflects both a change of perception and a cultural re-orientation. This is epitomised by the replacement of the epic genre of the Shahnameh with the illustrated chronicle of the contemproary imperial ruler: the Akbarnameh of Akbar (r. 1556-1605), the Jehangirnameh of Jehangir (r. 1605 – 1627), and the Padshahnameh of Shah Jahan (1627-1658). 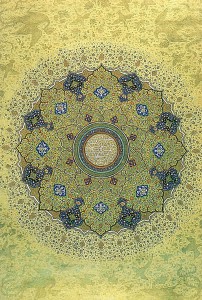 These texts not only gave the official version of the reign, they also conveyed the imperial ethic and political theory. The ‘hero’ was the living emperor, whose life exemplified the ‘ideal’ by virtue of his position as God’s representative on earth. The chronicles described specific events, most of which were within living memory, and their illustrations required an accurate rendering of historic time and place, and of contemporary material culture, to communicate the essential message with credibility. The emperor had to be perceived as triumphing over real dangers in the form of recogniseable enemies vanquished or peforming extraordinary feats of valour in slaying ferocious wild animals. To this ‘reality’ was added the imperial Mughal metaphor of the peace of Solomon, in which the emperor was presented as having the power to control the forces of nature by taming apparently ‘wild’ animals. Thus several well-known paintings show Akbar’s skills with wild elephants or an elephant run amok, the animals carefully depicted with attention given to detail and to their natural properties, a feature which was developed in the natural history studies commissioned by Jehangir.

Mughal imagery both developed classical traditions and also transformed them to create new symbols and allusions, and visual metaphors were carefully selected from the many sources accessible through the traditions of their heritage and also of their new empire, both Hindu and Muslim. The imperial studios, guided by their patrons, carefully spun a fresh cultural identity for the new dynasty. In this endeavour, which was pursued over the course of a century, the dragon and the simurgh were endowed with additional powers of metaphor and allusion, used as a synechdochic representation – the whole referring to a part or a part to the whole – characteristic of Persian poetry and illustration. Thus new meanings were absorbed, existing concurrently in a single image, often re-orientating their significance in the process.