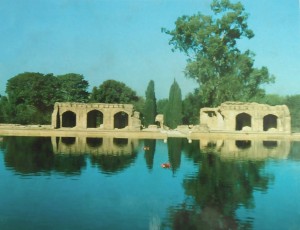 The gardens at Hasan Abdal, north-west Punjab, were a favourite resting place for the Mughals. It could water an army of 50,000 and is quite different from other surviving gardens of the subcontinent having evolved according to use rather than being planned as a single project.

Its asymmetrical form is the response to function and topography, for it was used not only by the Mughal emperors but by grandees executing their public duties. The area of pavilions and enclosure form only a small fraction of the site, and distinguishes this garden as a rare surviving ‘manzil’ bagh.

Interpreting the new archaeological evidence in the light of literary sources it becomes clear that the gardens at Hasan Abdal are quite different from those at Lahore, and indeed from any other surviving gardens in the sub-continent. They were not planned and laid out as a single project, but evolved according to use. Their a-symmetrical form is neither the result of unusual perception nor careless alterations undertaken at a later period but the response to function and natural topography. The manner of its development in this rather remote area, in which the imperial features of monumental scale, materials and decorative motifs predominate over regional traditions, gives insight into the nature of patronage and the imperial style. Indeed, the use of the gardens not only by the Emperor himself but also by grandees executing their public duties, highlights the ambivalence of the private and public persona of the emperor and the epithet “imperial” when applied to patronage and style. Above all the fact that the area of pavilions and enclosure form only a small fraction of the site distinguishes this garden from all others as being what can be termed a ‘manzil‘ bagh. These various aspects will be discussed in relation to the development of the site during the seventy years between the early 1580s and the 1650s.

Quite distinct from gardens designed under the impetus of imperial or noble patronage for the use of the Court is the garden at Hasan Abdal here described as a “manzil” bagh, “manzil” being used in the sense of a staging-post or place of accommodation for travellers. Hasan Abdal appears on maps noting the principal stages along the route from Qandahar and Kabul to Rohtas, Lahore and Delhi. In the Chahar Gulshan (The Four Gardens) a condensed history of India written in 1760 by Rai Chatar Man Kayath while in the service of Ghazi-ud-Din Khan, wazir of the Mughal empire, various itineraries are named, and “Abdal” appears on the route from Lahore to Attock Fort between Kala Pani and Haldarya . Even more specific as to its role as a manzil are two scroll maps in the British Library, describing the route from Qandahar to Shahjahanabad. Probably drawn in the last quarter of the eighteenth century by Maulvi Qulam Qadir who was in Qandahar with Mounstuart Elphinstone in 1814, but recording more ancient routes, they include notes of the distances between each place which although variable probably reflect the nature of the route in describing what could be covered in the course of a day’s march – a “manzil garh”. “Hasan Abdal” appears as 10 kroh (approximately twenty miles) from Kala Pani, and the stages mentioned are almost identical with those detailed by Jahangir in his Memoirs when chasing his rebellious son Khusrau in 1607. 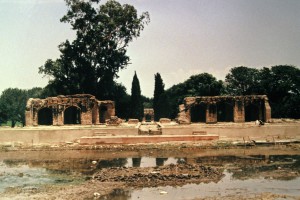 That the significance of the garden as a symbol of legitimacy was still a potent force is illustrated by Nazir Muhammad’s preparation of the reception feast for Prince Murad Baksh, commander of the Mughal forces, in the Bagh-i Murad rather than in the fortress of Balkh – the fact that the Khan’s proposal was accepted despite being an obvious a ruse to effect his escape shows that it was regarded as a normal courtesy in the circumstances. Moreover the poetic imagery of the garden, linking temporal authority and the physical world to the spiritual realms and Paradise through symbolism and allusion, was the shared heritage of both the Persian and the Turkic nobility at the Mughal Court who fully appreciated the many levels of meaning.

Hasan Abdal was also a statement of Mughal legitimacy and a suitable site in which to enact the etiquette observed for tribute from other sovereigns. The importance given to courtesies and signs of respect through which sovereigns or their ambasadors should be honoured (with the corresponding control of elegant insults) is illustrated by the immense honours heaped upon Khusrau Sultan, second son of Nazar Muhammad Khan, who sought asylum with the Mughal forces from his father in 1646.

Aurangzeb, a fine Commander during the campaigns for Balkh in 1647 and for Qandahar in 1652, recognised the symbolic importance of Hasan Abdal, for he made it the site of his headquarters from which to pursue the campaigns in Badakhshan during the 1670s rather than selecting the Fort at Attock on the Indus. In 1675 he finally abandoned his ancestral claims in this direction and turned his attention and energies to the conquest of the Deccan. Thenceforth the routes to Kabul and Kashmir became the preserve of travellers and merchants rather than the Mughal Court and encampment.

With the general decay of administration, particularly acute in the eighteenth century, the garden fell into disrepair (although the administering authority is not yet known). Indeed the source of funds for its development is not established nor whether the responsibilities fell upon the Amin-i ‘Imarat (Superintendent of Buildings) or upon the local notable such as the Governor of Attock Fort. It is thus not clear whether the imperial scale and decorative style of the site reflects the personal preferences and patronage of the emperor or if, as a site of strategic and symbolic importance, the “imperial” style simply reflects the general repertoire required for architecture associated with the imperial administration. Situated at a major staging post the enclosure almost certainly was used, in the absence of the Emperor himself, by grandees in the course of executing their public duties as well as by ladies of the imperial harem and Princes of the Blood, yet there must have been a status below which access was not allowed. Who controlled these niceties is not yet established . Answers to these and many other questions may be found in further excavations and historical research. Certainly the subject deserves probing, for the garden at Hasan Abdal is of the greatest interest both for the cultural history of the Mughal polity and as a unique surviving example of a ‘manzil’ bagh.