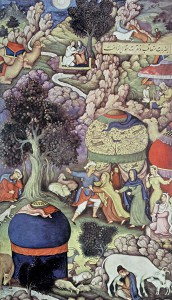 Miskin was one of the principal painters in the studio of Emperor Akbar and contributed to almost all the imperial manuscripts commissioned during the 158s and 1590s. His active life thus spans the formative period when the distinctive character and features of Mughal painting were being established. Like many artists, Miskin’s creative talent came into play not only through the natural stimuli of his own culture but also in response to the challenges of new orientations which were partly technical and partly exotic. A study of his career reflects many of the factors which influenced the development of the Mughal style and perception.

Miskin’s style and genius grew in response to the projects he undertook and the particular talents which each commission demanded. By reviewing his work chronologically it will become evident that at time he worked in several different style concurrently. He also contributed illustrations to a single manuscript completed within a short period of time whose quality varied from the superb to the mediocre, giving an insight into the subjects which inspired him and the nature of his artistic temperament. His career can be seen therefore, not so much as a steady evolution but rather as a maturing technique applied to a series of orientations which were attuned to a greater or lesser degree, with his own artistic aptitudes.