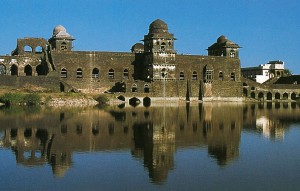 India : From Sultanate to Mughal Empire

The Indian Subcontinent produced some of the finest expressions of Islamic art and architecture. Muslim dynasties and mystics from the Islamic heartlands formed and nurtured the development of Islamic states in which non-Muslim cultures remained the majority and retained their intellectual and artistic vigour. Mutual exchange was a constant feature of life at all levels and non-Muslim ideas and motifs were absorbed to create a unique dimension in the Islamic visual arts.

The Sultanate period extended from the arrival of Arab armies in Sind in 711-712 to the secure establishment of the Mughal dynasty in north India (Hindustan) in the second half of the sixteenth century, although the Deccani sultanates survived until the late seventeenth century. The first phase of conquest absorbed the area roughly corresponding to Pakistan where Arabic was the court language and Baghdad and Damascus were the mainsprings of cultural and commercial life. Arab communites settled at important centres along the major trade routes to China and in the principal ports along the coast as far as the Bay of Bengal. During the eleventh and twelfth centuries invasions from the northwest opened Punjab to the influences of Persia and Central Asia. This orientation predominated during the thirteenth and fourteenth centuries with Turko-Iranian elites ruling the Sultanate of Delhi which extended from Punjab and Gujerat to Bengal, and the Deccan as far south as Madurai. Persian became the language of administration and courtly culture. The decline of the Delhi Sultanate led to provincial autonomy and the development during the fifteenth and sixteenth centuries of regional cultural expressions in which non-Muslim traditions were assimilated.

That a small elite could establish and retain control over such a vast and populous area while remaining a religious minority reflected a flexible attitude to religion on all sides. The early Muslim invaders were pragmatic, being primarily concerned with political and commercial control at minimal loss to themselves. The subsequent extension of political control in the early thirteenth century coincided with an intensive missionary activity by the mystical orders. Working in the vernacular languages as well as the classical Persian and Arabic, they did not make conversion to Islam an essential pre-requisite for participating in their form of religious experience. The development of Muslim society and spiritual life thus took place at all levels of society and did not create a permanent sectarian divide with non-Muslims. Respect for saints regardless of denomination and their veneration by many different communities was an important cultural catalyst and remains a phenomenon of Indian life even to-day. 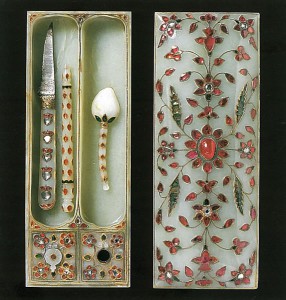 The rulers of the Delhi Sultanate welcomed the mystical orders and members of the court were counted among their followers. Many cultural practices specific to the Subcontinent, such as music and poetry at sufi shrines, received official sanction and remain part of contemporary practice. The caliph was far away or reduced to a figurehead after the Mongol invasions of the eleventh century, and even though the khutba was read in his name and many of the sultans received investiture, acceptance by the local elites of the ruler’s right to rule was as important. The blessing of a sufi Shaikh had its own political weight in the recognition of sovereignty.

It was expected of the monarch to support and develop Islamic society and charitable institutions such as mosques and madrasas, markets and caravanserais, palaces for administration of government and the law, provision of water and drainage, urban planning and civic amenities, and to encourage intellectual and cultural life by attracting scholars and literati from all over the Islamic world. Patronage of architecture and the arts thus was not simply the fulfillment of personal artistic ambitions. Form and style were a dynastic statement, the language of power and identity both political and religious.