BEGAMS OF THE HOUSE OF TIMUR & THE DYNASTIC IMAGE 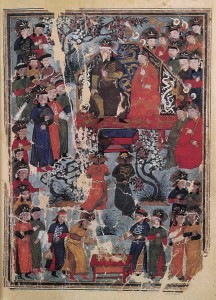 The de facto rulers of the Timurids and Baburids based their claims to legitimacy upon their supposed bonds of kinship with the House of Chinghiz, and went to great lengths in patronising historians, poets and genealogists who would justify these supposed links. However these links were extremely tenuous and open to challenge by many princes of more convincing provenance. Thus while they self-consciously recalled the tribal Mongol customs (yasa) in much royal ceremonial – the white felt of kingship, the feast of cups, the yak tail standards – their means of self-representation, particularly in the role accorded to architecture , cultural patronage and the political theory of legitimacy, owed far more to the urban Islamic traditions of the Persianate world.

The political function of art and architecture as a buttress for dynastic legitimacy is well attested, yet studies of patronage and the dynastic image have been orientated exclusively to the rulers. The contributions of individual ladies are unavoidably acknowledged – of Gauhar Shad, wife of Shah Rukh who ruled the Timurid dominions in Khurasan and Transoxiana from1405 and from 1420 to 1447 those in Persia and Iraq also, whose epigraphic inscriptions on her monumental buildings openly proclaimed her position and wealth. Nur Jahan, wife of the fourth Emperor Jahangir r. 1605-1627, who in the 1620s was minting coinage in her own name, is similarly renowned.

Yet the position of these remarakable queens hitherto has been regarded as an exception to the general rule, their ability to rise above the presumed anonymity of women in a Muslim court attributed to their influence over the imperial hormones. For it has been assumed that the practice of hijab necessarily imposed a seclusion which effectively limited the women’s sphere of influence to the harem.

Whatever the practice of hijab – which varied widely – its effect on their sphere of activities was minimal. Those of the royal House had their own independent households, with a hierarchy of officials to run them, headed by Diwans who were not invariably eunuchs. The extensive incomes at their disposal, drawn from lands, trading activities and annual stipends granted by the emperors, enabled them to extend their patronage beyond manifold cultural expressions to include dynastic architecture.

In the elaboration of the dynastic portrait under both the Timurids and the Baburids, Begams are remarkable rather for their absence. Although there are some paintings of women which could be considered portraits there appear to be no examples which parallel the presentation of the Emperor in the full might of sovereignty. This phenomenon needs explanation, especially since it appears at a time when dynastic portraiture reached its apogee in sophistication and quality of rendering during the reigns of Jahangir and Shah Jahan, and when the Begams were seen to be performing a public role. 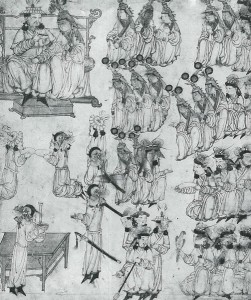 The enigma of their apparent absence from dynastic portraiture is compounded by the numerous images from fourteenth century Mongol manuscripts in which the Emperors were depicted enthroned, in full assembly of notables – qiriltai – with their principal consort. Here, this double-page composition from the Diez album in Berlin shows a Mongol ruler enthroned with his senior consort; among the ladies to the right probably are other consorts and their attendants, ranged in seried ranks, unveiled, opposite the Mongol princes and notables.

But if the Begams do not appear in dynastic portraits, and are not presented in a conventional manner in the illustrated histories and genealogies, they were not entirely excluded from the imagery. Rather, the integral role of the begams to the matters of statecraft and legitimacy was acknowledged in new, and perhaps more exalted, forms. For they appear in nativity scenes, giving birth to the semi divine ruler, and thus as the essential link in the chain of legitimacy between the Divine Source of all Authority and his earthly vicegerent. In the dynastic image the role of Queen Mother comes to predominate over Queen- consort, reflecting the new political theory initiated by Shah Rukh in the early 15th c, an image embellished by expressions of the cultural and social realities of her power.