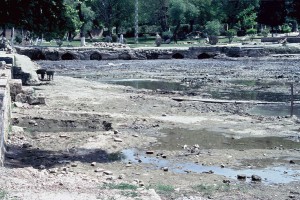 The Mughal gardens at Hasan Abdal can be dated to the 1580s. Situated in a large oasis with orchards and springs whose sweet waters could supply an army of 50,000, it was a major halting-place on the route to Kashmir and the Grand Trunk Road to Peshawar, Kabul and Qandahar.

The gardens were first laid out by Raja Man Singh, with additions by Jahangir and Shah Jahan. The various phases of construction were identified, the principal tanks excavated and the contemporary plaster channels supplying the fountains by natural gravity were reinstated

Interpreting the new archaeological evidence in the light of literary sources it becomes clear that the gardens at Hasan Abdal are quite different from those at Lahore, and indeed from any other surviving gardens in the sub-continent. They were not planned and laid out as a single project, but evolved according to use. Their a-symmetrical form is neither the result of unusual perception nor careless alterations undertaken at a later period  but the response to function and natural topography. The manner of its development in this rather remote area, in which the imperial features of monumental scale, materials and decorative motifs predominate over regional traditions, gives insight into the nature of patronage and the imperial style. Indeed, the use of the gardens  not only by the Emperor himself but also by grandees executing their public duties, highlights the ambivalence of the private and public persona of the emperor and the epithet “imperial” when applied to patronage and style. Above all the fact that the area of pavilions and enclosure form only a small fraction of the site distinguishes this garden from all others as being what can be termed  a ‘manzil’ bagh.

The project included a proposal for revitalisaion of the gardens and planning space for contemporary visitors use as the principal Islamic site near the capital Islamabad.  This included programmes for schools for understanding botany and ecology of the area as well as an area for public performances.