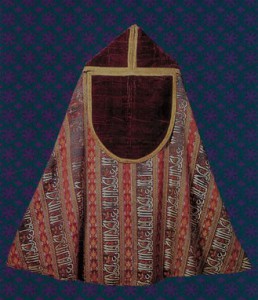 A Travelling Exhibition prepared for the British Council 1997 to celebrate the Golden Jubilee of Pakistan also displayed in Bangladesh, Brunei, Yemen, Turkey

The exhibition explores the theme of Britain and Islamic cultures through the links which have been established over the centuries, and illumines some of the many dimensions where these two oceans meet. Within an historical perspective Britain, as part of Christendom, and Islam share many cultural roots and beliefs. On these foundations have been established over the ages a profound mutual respect which transcends the vagaries of political circumstance. Such traditions, constant yet adaptable, have for long been channels of communication, and remain sources of cultural enrichment and creative energy.

Christianity and Islam, springing from Palestine and Arabia, share a common root in their debt to the Hellenstic cultural heritage.
It was in many of the great centres of learning in the eastern Mediterranean that Islam found its first intellectual roots during the second half of the 7th century CE as the Umayyads took over the eastern dominions of the Roman empire.
For the Christian states of western Europe, emerging from the ruins of the Roman empire during the first Millenium CE, access to the Islamic civilisation which predominated in the lands of the Mediterranean was through complex webs of relationships. Centres of learning – such as Baghdad, Damascus, Aleppo, Jerusalem, Cairo, Alexandria, Tunis, Fez, Seville, Cordoba – and Christian monastic communities in the Muslim states of the Levant and Egypt, North Africa and Spain, had developed channels of communication both within those areas and with centres in France, Italy, Germany and England, through which both knowledge and people could travel. Such links were further extended through the shared languages of Syriac, Arabic, Greek, Latin.

Formal relations between England an the Muslim courts developed from the sixteenth century onwards following the realignments of power in the Mediterranean and the European discovery of the sea routes to Asia.

The first Chair of Arabic was established in 1632 at the University of Cambridge, and in 1636 a Chair was inaugurated at the University of Oxford. Scholars often took positions with the East India Company or became administrators in Britian’s overseas dominions. Many made studies of the languages and socieities which remain authoritative to-day. The discovery of oriental literatures, known through translations, caught the public imagination, and learned socieitie were established in Asia and in Britain to promote cultural understanding. 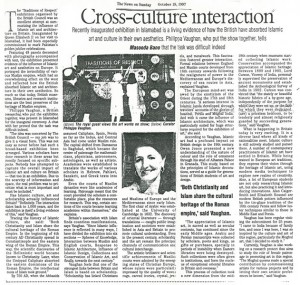 The appreciation of Islamic art, in sacred as well as secular contexts, has continued since the early Middle Ages. Arabic and Persian manuscripts were collected by scholars, poets and kings alike. Such collections often were given to institutions, and form the nucleus of exceptional oriental libraries in Britain and overseas. A number of practitioners of Islamic art have settled in Britain and their work is held by major public institutions. In the late twentieth century scholarship and the arts remain the principal channels of communication and cultural interchange.