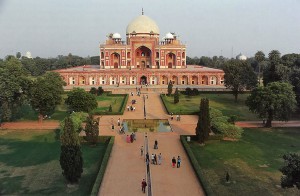 Consultant to the Aga Khan Trust for Culture 1998-2002 in collaboration with the Archaeological Survey of India for the Revitalisation of the Gardens of Humayun’s Tomb, Delhi

Participation as the art historian for this multi-disciplinary project undertaken by the Aga Khan Trust for Culture together with the Archaeological Survey of India.

The construction of Humayun’s Tomb was begun sometime between 1561-3 at the instance of his son Mughal emperor Akbar and was completed in 1570-71 Significantly it was situated in Delhi, capital of the former Delhi Sultanates although Akbar had already moved his court to Agra. Every aspect of its form and design carried a potent symbolism through which to present the new dynasty in visual metaphor. The choice of site and construction materials linked the Mughals with the regional traditions of the land they claimed to rule. The selection of red sandstone and white marble to face the brick core of the structure, followed the imperial traditions of the Tugluqs, an earlier Turkic dynasty of the Delhi Sultanate whose authority extended almost throughout the Sub-continent and who were equally conscious of the powerful imagery of dynastic achitecture. The form and scale were new however, and proclaimed the cultural links of the Mughals with their Timurid heritage and source of legitimacy.

For the present project the most significant innovative features were situating the mausoleum in a formal garden enclosure laid out according to a geometrical plan, and placing it in the centre of the enclosure. The use of pavilions, pools and hydraulic systems was a tradition long established before the Timurids and examples can be found in the palaces complexes of the Seljuqs, Abbasids and Umayyads and beyond the Sassanians to Achaemenid Parsagadae (early 6th century BC). However the exact lay-out of earlier gardens, the meaning of “garden” under the Timurids, and the precise form of the Timurid bagh and chaharbagh, remain vexed questions. Timurid literary sources use the terms variously and ambiguously. In early Mughal descriptions, both terms may be used in respect of the same site, and excavations of gardens described as chaharbagh by Babur have shown that these were not enclosed enclosed spaces with cross-axial walkways. 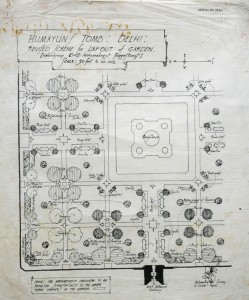 The geometric and cross-axial design of the garden enclosure of Humayun’s Tomb, and its associated pavilions/gateways, and hydraulic systems, are thus of particular significance for the evolution of the Mughal garden and its link with Timurid and other models. Moreover it established a new form for mausolea. Above all by situating the tomb in the centre of the garden, rather than following traditional Timurid practice of placing the pavilion at one end, the typology of tomb and pavilion was fundamentally altered. A new optical order was introduced in which the viewer was no longer the subject but became part of the dimension of viewing.

This new typology had profound implications both for use of space, and for plantings. Akbar initiated the ritual circumambulation of the tomb as a focus of imperial visits to the capital following the tradition of royal tours of Delhi established by Babur. Such visits involved ceremonial and significant numbers of courtiers whom the garden enclosure was required to “accommodate” at least temporarily.

How far such variatons of use affected plantings is not clear as no plans, illustrations or waqf documents from the later sixteenth and seventeenth centuries have been found to date, and literary or poetic descriptions yield little detail. By the early nineteenth century, if not before, the garden was in deep neglect and partly put to agricutlural use. The river changed course and no longer flowed by the eastern perimeter wall.

This lack of contemporary evidence for plantings makes the architect’s association with the principal family of horticulturalists and landscape designers at the court of Timurid Herat of particular interest.

1.1 How far can the original lay-out be interpolated from existing evidence
1.2 Does the idea of a “symmetrical landscape plan”, designed according to a grid, necessarily imply complete symmetry throughout, or can find expression in the principles of balance, proportion and harmony

2.1 What were the original sources of water supply and where were they located
2.2 How extensive were the original hydraulic systems and how far are were they intrinsic to the lay-out and design of the garden
2.3 Do the walkways conceal subterranean water channels as described in the Irshad al-zira ‘a
2.4 What was the impact on the garden of the Jumna changing course c. 1821 and were alternative sources of water established at that time
2.4 Were features of the hydraulics, and their relation to the overall design, altered significantly by interventions in the early, middle and later years of the 20th century

3. Use of the Garden Enclosure

3.1 How far was the symbolic function of the tomb reflected in use of the garden enclosure
3.2 How do the architectural elements of the perimeter reflect historic use and how were they integrated into the design
3.3 How far was use a factor influencing design of plantings

4.1 How much of the original design can be known through existing evidence

4.2 To what extent are the early species identified

4.3 Do the early species still exist

5. Environmental Development of the Garden Enclosure

5.1 Which are the appropriate sources and models for new plantings

5.2 How far should new plantings be integrated into the design of plantings retained from the later 19th and 20th centuries

5.3 How far can the symbolism of the site and historic useage be reflected in new planting patterns

5.4 Should all areas of the enclosure be equally accessible

5.5 What will be the irrigation regime

5.6 Can examples of historic methods of irrigation and forms of hydraulics be integrated into the development proposals or would these require a separate treatment and management regime

5.7 How far should new planting proposals reflect current horticultural and general management of the site

5.8 What is the time-scale for the implementation of proposals

a) in selected areas
b) overall

The work was implemented by project manager working with a garden designer.

Some excavated elements of the garden channels have been conserved and re-covered, including plaster channels.

The original hydraulic systems provided for a single bubble-and-swirl fountain in the North quadrant, with a return system of concealed pipes for water conservation.  The four spray fountains currently seen are enabled by electric pumps and were installed in 2004-6